It is a fact that musical genres, instruments, and playing skills have evolved throughout the years. All of these things could not help but have an effect on the development of different kinds of guitars all over the world.

The musicians of the 20th century, desiring to play something new, modified and improved a tried-and-true design to make instruments like the one shown.

At the time, Gibson wasn’t interested in the new idea, but Les Paul quickly made an electronic version of it and sent it to Leo Fender.

Varieties of guitars and their distinctions

Let’s begin by discussing the many sorts of guitars and their differences:

As you may well know, the first instrument was a classical instrument. The current classic is different from the one made a hundred years ago because, starting in the 1950s of the 20th century, its strings are made of nylon instead of animal veins.

Classical instruments usually have six nylon strings. The sound will be faint since the pick is seldom used in place of the fingers.

Chords will not sound as loud and smooth as they would on an acoustic guitar, since the strings are wider apart and begin to resonate a bit longer after being struck.

Guitarists typically use it to play classical music or other styles with a mellow sound, where playing with your fingertips adds to the beauty of the piece. An interesting-sounding Hawaiian ukulele would be a classical instrument’s cousin.

The categories of acoustic guitars are as follows:

Always keep in mind that an electric acoustic instrument without a connection will sound worse than a conventional one, since the installation of a sound pickup will weaken the soundboard’s resonant qualities.

The difference in varieties of acoustic guitars may be in the form of the soundboard and the type of wood used. But this mostly pertains to the price ranges and sound quality, and a novice does not need to know much about it.

When it comes to making musical instruments, the resonant qualities of expensive woods are often much better than those of their less expensive counterparts.

The jazz variant is distinguished by the absence of a central hole on the soundboard and the presence of two holes on the sides. The jazz variation is good for playing solos and is made for jazz music in particular. 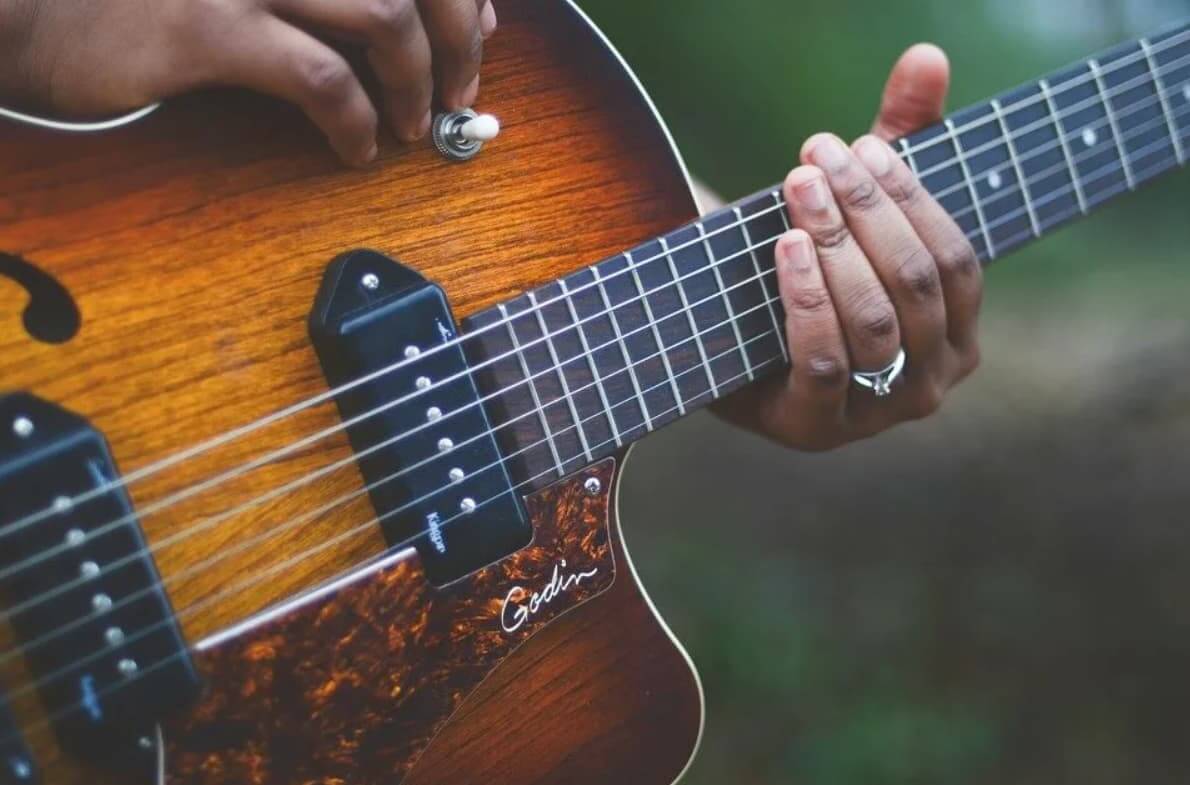 The most intriguing aspect is the variety of electronic guitars available. In actuality, just one kind exists: the electric guitar.

There are several variations of electric guitar bodies, pickups, fingerboards, and construction materials. It will be essentially the same electrical device.

One may vary the tone of an electric guitar:

The more equipment you use, the greater the variety of sounds you can extract. Electronic instruments have taken over the professional music business because they can copy different sound waves.

The only varieties of guitar fingerboard that vary fundamentally are the classics. Occasionally, all the picks on an electric guitar may be on one side, although there is no essential difference in this regard. It’s merely a design feature.

The primary difference between an acoustic and a classical guitar is the thickness of the neck. A narrow fingerboard on an acoustic guitar makes it possible to play in more modern ways.

Switching from a thick classical fingerboard to a narrow one and vice versa might be odd at times. Usually, though, it is a matter of habit, and the pain rapidly disappears.

While the guitar is rather simple on the surface, it’s capable of great versatility and complexity. This may seem intimidating at first, but if you begin with some basics, you will be able to learn guitars and their variants easily.